The Best Post Emergence Herbicide for Maize and Beans

Post emergence herbicide for maize and beans which is the best?

You have just intercropped your maize with beans.

All has gone well.

The rain has come and your seeds have germinated very well.

A few days later, the time to weed your field arrives.

However, you have one concern.

You do not want to do hand weeding.

It is tedious, time consuming and expensive.

After much thought you come to the conclusion, “I will weed my farm using an herbicide.”

However, you have a Huge Problem.

You do not know which post emergence herbicide to use.

If that describes your situation, you’ve come to the right place.

I will tell you which herbicide to use on both maize and beans—without losing any of them.

Sounds too good to be true? 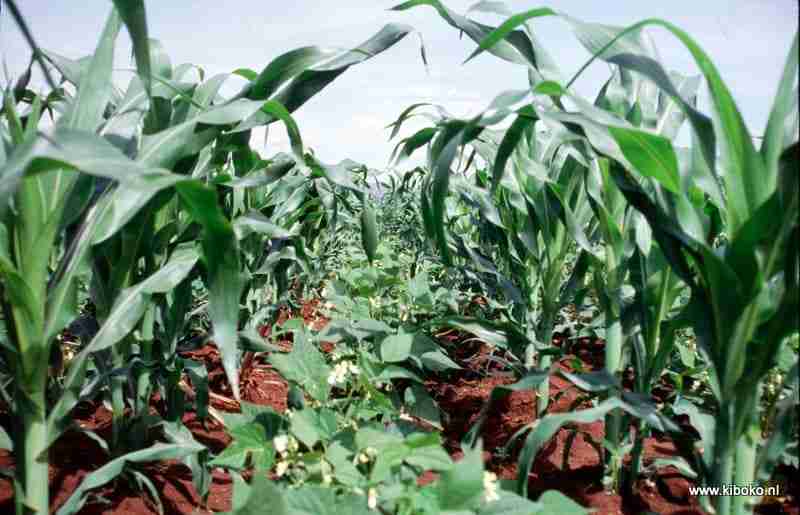 There’s A Post Emergence Herbicide You Can Use On Maize That Has Been Intercropped with Beans Without Harming Either of Them.

Ready for the answer?

Well, the herbicide is Bentazone.

(To use the herbicide, you will need a knapsack sprayer, which a wide variety are available online here. check them out)

“Why use Bentazone as a post emergence herbicide for maize and beans?”

In Kenya, Uganda, and Tanzania, this bean herbicide is sold as Beansclean or Basagram.

You can buy Beansclean/Basagram here

(Please note the active ingredient for Beansclean/Basagram is Bentazone 480L.)

Not many people know about it, and how it works.

That’s why I am writing this today.

Now that I’ve told you the best post emergence herbicide for maize and beans, you could be tempted to click away.

Knowing the best herbicide for maize and beans is just one part of the solution.

I urge to wait.

Carefully, read further down this post so that you know how Beansclean/Basagram works in both maize and beans.

This is not a threat.

But you know how herbicides can lead to total loss is not handled properly.

Do we have a deal?

How I came to Discover Basagram/ Beansclean Was the Best herbicide for both Maize and Beans.

For a long time, I had the desire to grow yellow beans.

However, I kept postponing that dream.

The reason for that was…

Time and again, I could find myself lacking one thing that stopped me from doing it.

Sometimes I lacked the funds.

When the money was there, I found myself without the time.

And I remember in another occasion, I had the money, the time but I couldn’t find the right land to lease.

How frustrating this was for me!

Then one growing season, by sheer luck, ALL things I needed to grow yellow beans lined up.

I found myself having the…

As I was planning to start this project, I casually shared this idea with a friend of mine.

Believe it or not, this friend of mine was also growing yellow beans in Kilgoris.

However, I didn’t know about it.  (shh! “People rarely share how they make good money. They keep it secret!”)

So when I shared with him my idea, he was so excited about it.

That’s when he opened up his experience.

He started spilling the beans on how he makes money growing beans.

And in the course of our talk he introduced me to using Beansclean herbicide on yellow beans farming.

I shared the detailed story on using Beansclean on beans here.

When I sprayed the herbicide on grasses, I noticed it didn’t kill the grasses.

This discovery exited me.

It compelled me to do some research.

During my research, I found that the herbicide is also sold as Basagram in Kenya.

I also discovered that Basagram is also used as a selective herbicide in rice fields (to clear broad leafed weeds that I’ve just mentioned).

That’s when it hit me.

Rice is a grass, likewise is maize.

Armed with this discovery, I set to give it a try.

It cleared all the weeds leaving behind the maize and the beans.

From then henceforth, I’ve been using Basagram/Beanslcean as a post emergence herbicide for maize and beans. 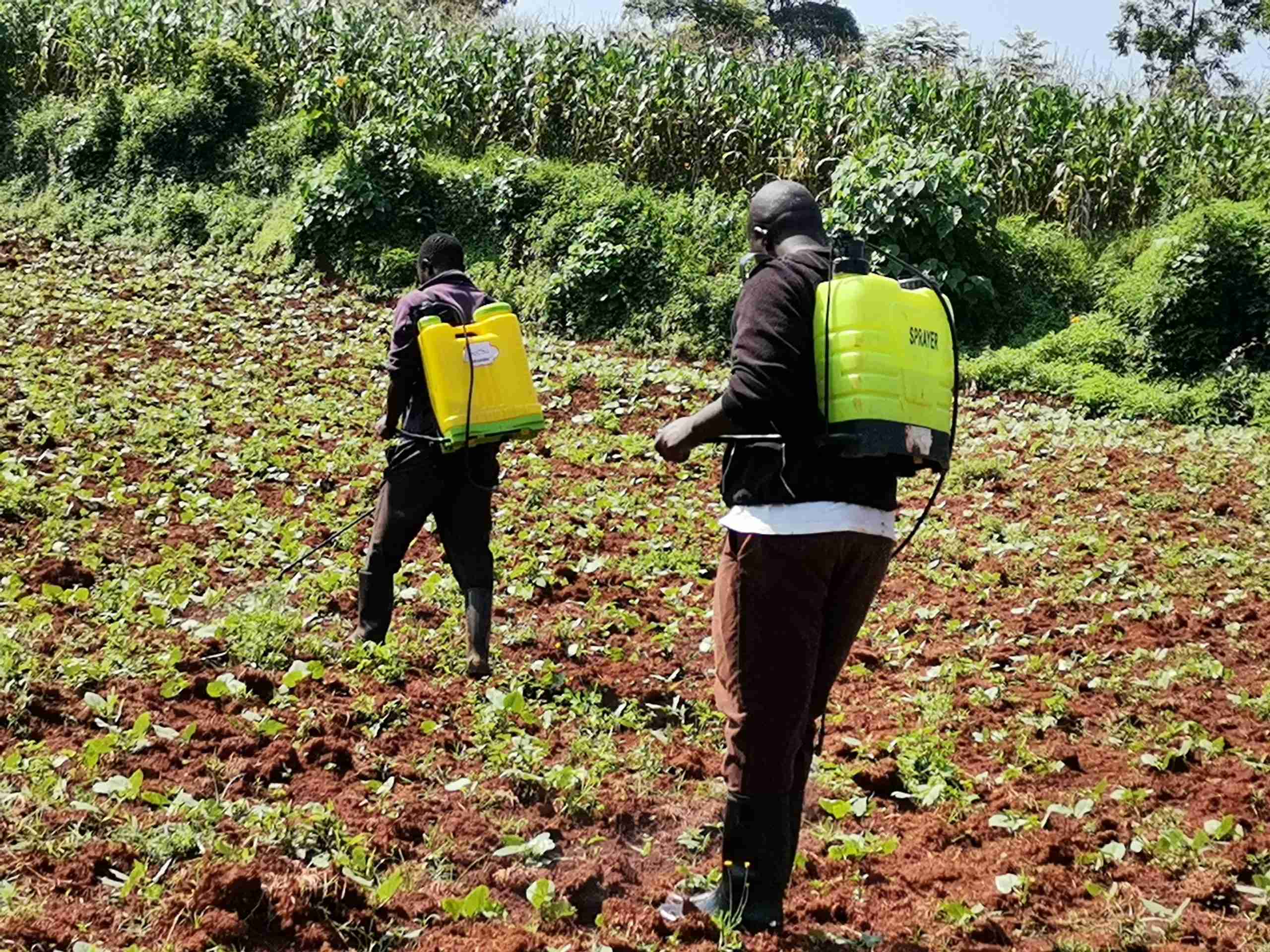 As I have mentioned before, these Beansclean (also known as basagram) does not kill grasses.

Therefore, to use it successfully, you must make sure that your farm doesn’t have any grass weeds. 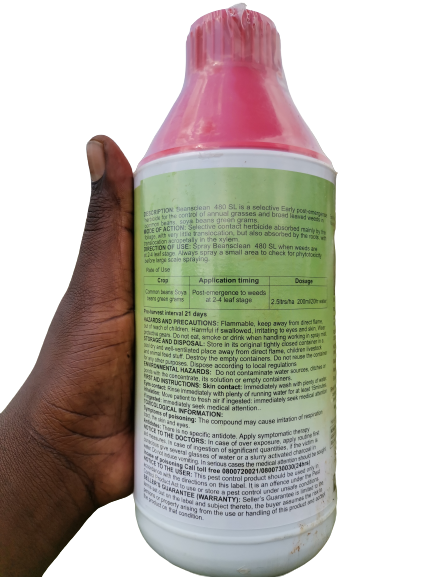 Expected Results for Using the Post Emergence Herbicide for Beans

In 2-3 days’ time all the broadleaf weeds should have started wilting.

Once they wilt, the farm will be free of weeds for about one and a half months.

This will give the maize and beans sufficient time to grow and outcompete the new upcoming weeds.

Basagram/Beansclean is the Best post emergence herbicide for maize and beans. 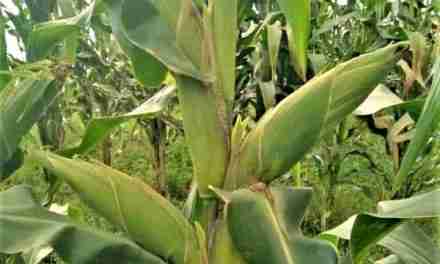 Maize Yield Per Acre: Amazing Tips On How to Boost Your Yields 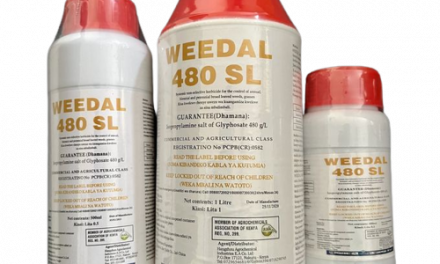 Herbicides to Use on Kale For Amazing Profits and Time Savings 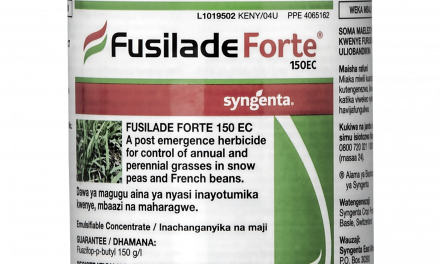 Herbicides That Kill Only Grass Best in Kenya

How to Get 10 Bags of Beans Per Acre Even You've Been Struggling to do it. Download FREE PDF.